After Opera release 11.60, now Mozilla has released their latest Firefox 9.0 web browser for Linux, Mac OS X and Windows operating systems. You can download the final version of Mozilla Firefox 9.0 on the official FTP site of the Mozilla company. 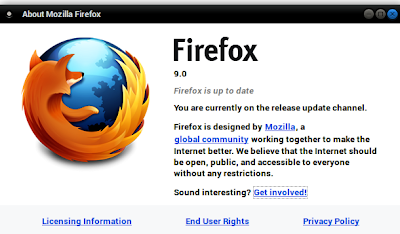 Some might argue that the version number tend to confuse user since there is no major change from the previous one, only some improvement with java script and layout . We will have Firefox 16.0 by the end of next year hehe. Anyway, for me just appreciate what the developer had done. They all did a good job on developing a stable and fast internet browser. It’s not like we need to pay for it. Just +1 it ; )

I already tested Firefox 9.0 on my Linux Mint 12, and it is slightly faster than Firefox 8.0. Usually I will let Firefox to open several tab during startup. So I can open immediately my Adsense account, Reader and Nuffnang, so it save a lot of time.